So I couldn’t make it to the trip to Solano Avenue last Wednesday with the class, but I’ve decided to go during this weekend to see what I was missing.

Here are a few businesses that caught my eye:

Matsu was the first store I stepped into. It has a really nice display on the window of little Japanese figurines and a bunch of things for bedding like futons and seeded pillows (those pillows that have seeds instead of feathers).

The Matsu Fine Bedding Store has a great range of items straight from Japan. It was interesting how the place was set up as there were little trinkets and figurines covering the store. The store also sold fabrics for traditional clothing wear like kimonos. While I was there an elder American couple were looking around at the tatami beds (ranging from $400-$1200). The wife was saying that she thought Japanese bedding and pillows were fantastic because they last long and are good for posture (apparently?). The store owner agreed and mentioned how tatami mats, futons, etc have been around in Japan for a long time so they must have been doing something right. It’s pretty interesting if you notice how Asian cultures like hard bedding and pillows as opposed to the Western culture of having everything soft and made of feathers and memory foam.

The Matsu store was so cute that I even bought myself this awesome cup, which was probably the best thing I bought in a really long time :

Looking at Matsu linguistically, the store label was written in an “asian” font, which I thought was pretty clever to do so it emphasizes the “asian-ness” of the store. In the Japanese dictionary, Matsu means “pine” or “wait” so I don’t know how this relates to the store, but maybe it’s referring to the zen and nature-ness of their products? Every bedding item seems to be made of natural elements such as wood and flax seeds.

Another business I found linguistically interesting was Onzen the Spa:

Onzen in Japan typical is a hot springs spa. I remember going a few years ago in high school and it was probably the best part of my trip to Japan. There’s just something about being submerged in hot steaming water that calms the mind and body. However, this business isn’t a hot tub business. It’s a spa that does regular spa things, like facials, massages, and pedicures, which is unfortunate cause the name can be misleading to those who have experienced the magic of an Onzen. The typography of their Logo is also similar to the “asian font” of mimicking brush strokes.

Renee’s Chinese Restaurant also was pretty interesting. It’s an “organic” Chinese restaurant, which represents the Bay Area really well since the Bay Area is into organic and fresh produce. I think this is the first “organic” asian restaurant I’ve seen in the Bay Area!

Bowl’d is a korean restaurant that interestingly has a lot of sentimental value for me. When my mom helped me move out here to Berkeley during move-in for the dorms, we stumbled upon this restaurant cause we wanted some Korean food. We didn’t expect it to be so good, however! My mom and I have definitely been to this place more than once and I come here every so often for their kimbap (korean sushi) for nostalgic and culinary purposes.

That’s pretty much it. I love food.

So over Lunar New Years, KoreanAir (the airline company based in Korean) sent me a Lunar New Years Greeting. In traditional korean it says something a long the lines of “Live a long and prosperous live” (I think), but I don’t think the real literal meaning can be directly translated in English.

What I found more interesting about this Greeting is that it says “Happy Lunar New Year”.

So I guess this blog is just to promote cultural and traditional awareness and differences between different asian cultures. Calling it “Chinese New Years” creates this false notion that everyone who celebrates Lunar New Year celebrates it one way.

On a side note, Happy Year of the Snake! Apparently it’s the year of changes, where we “shed” our old skin. Hm? Something to think about maybe? 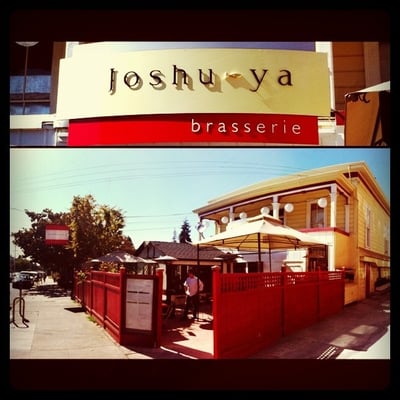 I’ve heard many good things about Joshu-ya as one of the better sushi restaurants at Berkeley. I’ve only eaten here once, but I would have to agree. The fish/sushi at Joshu-ya is a lot fresher than Tako Sushi at least, but then again I wouldn’t consider Tako Sushi a legitimate sushi/Japanese restaurant at all.

Joshu-ya has a mix of asian + western ambience. From what I remember, the decor of the restaurant had a lot of Japanese influences, i.e. the bamboo windows/sushi bar. The sushi chef can also easily be spotted rolling some nigiri or slicing some fresh sashimi behind the sushi bar. Also, pieces of fresh fish can be seen in a glass case infront of the sushi chef, which is a way the restaurant assuress its authenticity, quality, and freshness. Here’s a photo from the last time I ate there, which was summer:

I don’t remember the name but it had shrimp tempura, avocado, and shrimp. Best combo!

From the photo, the sushi seems pretty authentic. Fresh ingredients, wasabi, fresh ginger, sprinkles of sesame seeds, and miso soup! What more can you ask for?

The table setting was very asian as well, as you can see the place mats are made from a bamboo-like/tatami material.

However, the menu had no Japanese lettering at all. All of the menu was in English, or romanji (romanization of Japanese). I.E.: Sashimi, Kampachi, Hamachi.

Joshu-ya’s authenticity as a Japanese restaurant went as far as its appearance and cuisine, but that’s pretty much it. I assume that it wasn’t gonna  go through the trouble of making the menu in hiragana/katakana just to strengthen its authenticity. Also, the name of the restaurant may sound Japanese but no Japanese characters can be seen for translation purposes. I don’t think joshu-ya even means anything in Japanese literally, but -ya does mean “shop/store/restaurant” I believe. Thus, the sign “Joshu-ya” can be both read as an index and symbol. As an index, “Joshu-ya” can tell you that this restaurant is in an English-speaking place. As a symbol, “Joshu-ya” symbolizes the Japanese restaurant itself, and maybe if you’re familiar with Japanese linguistics you can argue that this symbolizes an Americanized sushi restaurant.

Enjoy this picture of my favorite sushi place back home.

Restaurant called “Kai” back on Guam

My name is Chelsea “Hyun Young” Park. I’m a current sophomore majoring in Media Studies. My hometown is a lovely island called Guam. My hobby is to meow to songs.

This is one of my favorite artworks: